MARINE CONSERVATION: What is it?

The ocean is the largest living space on the planet, covering more than 70 percent of its surface. It is a resilient and dynamic environment, however everything has limits. Marine conservation is a term that refers to protection and preservation and at the core is the understanding that we need to limit and restore the damage.

Why the Ocean is important:
When we start to understand our intimate relationship with the ocean we recognise more clearly that our well being is dependent on the health of the sea and the environmental services it provides for us.

Long before animals appeared on earth, a tiny blue-green bacteria living in ocean was the first to begin to the use the sun’s light for energy it needed to live. The process, photosynthesis, split water molecules. The reaction released oxygen and the cyanobacteria became abundant. Over millions of years this oxygen ‘sweetened’ the atmosphere and made it breathable. Although land plants are significant contributors to it, most of the air we breathe is dependent on ocean processes.

Our early ancestors left sea to live on land and yet it is still very much part of our lives. In fact, we are made of the same stuff. In her book, The Sea Around Us, Dr. Rachel Carson explained that our bodies contain the same chemical elements as sea water in approximately the same proportion.

Dr. Sylvia Earle, whom the New York Times named Hero for the Planet, also provided us with another perspective during her winning TED Talk prize Wish to protect our oceans. [1] Our world’s biggest assets are resources held in the sea. It is a bank holding our future. We need to protect it and keep it healthy.

Australians are responsible for an ocean territory larger than our land mass. is charged with looking after the waters from our coasts outward to 200 nautical miles. As representatives of the community a suite of government agencies enforce laws, regulations, policy to protect our waters. Ultimately, though, it is up to individuals to use their actions and their voices to influence ocean health. First we need to understand what is going wrong, things are out of balance.

The baseline of what is healthy and normal has shifted radically and what one generation knew to be true of their environment is not the same in later generations. It is not merely a matter of evolution.

Human impacts
We extract oil and minerals. We hunt ocean food as individuals, as communities or in commercial quantities using super-sized fishing vessels. Once productive fisheries have already collapsed and 90 percent of biggest fish in the sea are gone. We fish more thoroughly and extensively than at any time in the past.

Ships harbour exotic marine organisms in ballast water and clinging to their hulls. These invaders are turning up in habitats where there are no natural controls, placing pressure on native species with devastating results.

As a result of polluted stormwater run-off, ocean gyres of the world have captured plastics and marine debris that swirl in large slow endless whirlpools of trash. Over 450 dead zones are currently identified.

“On a global scale, approximately 80 per cent of marine pollution arises from land-based activities such as urban development, agriculture, manufacture, transport, energy production and day-to-day domestic activity. Types of pollution include litter and oils, municipal wastewater, nutrients and sediments, radioactive waste, heavy metals and persistent organic pollutants. Once in the marine environment, the pollutants are absorbed by marine life, settle in river mouths and on the ocean ﬂoor, or follow currents and eddies to distant locations. The pollutants pay no attention to national maritime boundaries or the sensitivity of the ecosystems they impact upon.” [2]

The good news is that everyone, at home, work, on the land and off it, can make a difference.

What is being done about it
There are natural systems like vegetated river banks, floodplains, salt marshes, mangroves and inshore seagrasses that act as natural filtering zones for run-off. These systems help to mitigate or halt the flow of harmful pollution riding in and on stormwater run-off.

Scientists assess the health of the marine environment through measures and monitoring of change. They are taking a greater interest in employing community volunteers to help them fill in these knowledge gaps and we are beginning to see a new generation of citizen scientists emerge.

Initiatives that observe and record information about marine animals, plants and habitats around are training the community how to gather data. The facts and figures then feed into information hubs that can help inform management decisions. Participants learn more about their environment; provide a community service and contribute an informed voice to government. School students are one sector taking up the challenge.

Outdoor educators can encourage action. It can be useful to identify local volunteer programs for students by checking with the local council or looking up conservation groups like; Coastcare, Coast Action, Conservation Volunteers. Speaking directly with community groups and volunteer programs may assist students wanting undertake their own conservation initiative. Some coastal conservation leadership tools can be found on AUSMEPA’s website: http://www.ausmepa.org.au/student-leadership/

There are many marine conservation groups like; Coral Watch, Ghost nets Australia, Mangrove Watch, Reef Watch or Reef Check, Turtle Care and Seagrass Watch who work in and around coastal waters to protect ecosystems. Prevention is better than cure and remediation is challenging.

Seagrass restoration
Shallow seagrass meadows at the northern and eastern portions of Westernport vanished in the 1980’s affecting coastal buffering from wave and current action. The community around Westernport were appalled as seagrass turned to mudflat and erosion noticeably speeded up.

Highly sought after commercial fish species depend on seagrasses as nursery areas. The modest looking seagrass meadows have been described as extremely high output marine food factories. These unassuming true plants have roots, flowers and leaves, unlike the macro algae we call seaweeds. A large numbers of animals shelter in seagrass creating a dynamic web of life. When the seagrass disappeared baby fish weren’t able to find the protection and food they needed. One notable species affected was King George Whiting.

During the time since the die-off some very slow natural regeneration has occurred. Although early community efforts to restore seagrass were unsuccessful, persistence was rewarded. The Westernport Seagrass Partnership[3] working with scientists, government agencies and schools built a growing picture of what the impacts were and what collateral damage occurred. Additionally they were able to trial and improve on what restoration techniques worked and the importance of continuing conservation efforts to protect coastal seagrass meadows for the future.

and stewardship
is surrounded by one ocean with many names; Indian Ocean, Pacific Ocean, Southern Ocean, , Coral Sea, Tasman Sea, Torres Strait, and more. Around the country there is a growing recognition of the need for safety zones to conserve and protect our marine flora and fauna. Marine Protected Areas (MPA), or wet parks, can have several levels of protection.[4]

Arguably the most important MPAs are ‘no take’ areas that exclude extractive activities like fishing or mining. They are sanctuaries for plants and animals, look but don’t take. They are open to education, scientific research, tourism, recreational activities and have become ‘hope spots’ for the enduring health of the ocean.

There are opportunities for outdoor educators to engage with marine park managers and friends groups. An example of one is Ricketts Point Marine Care.[5] It is made up of people who advocated a representative system of no-take marine parks prior to the turn of the century and were finally rewarded with their own Ricketts Point Marine Sanctuary 10 years ago. These enthusiastic people provide community and school based environmental education programs and activities, monitor the health of tidal and sub-tidal reefs and they work with state agencies to ensure that the area is suitably protected from negligent or careless action by others.

The bottom line: adopting a marine park, restoring coastal vegetation or engaging in scientific marine monitoring is not only useful and instructive, it is fun and gives a sense of worth. If you live by the sea and you don’t have a marine park friends group nearby you may want to start one.

Enough for all forever
Australians love the sea; it is part of us, part of our history and will determine our future. Each of us has a part to play in keeping our waters clean and healthy. As individuals we can reduce the amount of waste we produce, reuse or recycle more and pick up three pieces of litter a day. We can make a choice to give back to the planet through participation in community monitoring or restoration efforts. And we can use our individual actions and our words to make sure that governments know how important it is to keep our ocean clean, healthy and sustainable.
----------------------------
The AUSMEPA believes that you and your kids can make a difference. Visit their website www.ausmepa.org.au for a range of marine education resources including student research units, leadership tools for coastal conservation, literacy readers and school based marine conservation projects will be considered for the Rhondda Alexander Memorial Education Grant.

[1] Sylvia Earle’s Prize winning TED Talk by http://www.ted.com/talks/sylvia_earle_s_ted_prize_wish_to_protect_our_oceans.html
[2]Diffuse pollution like used packaging finds its way into the environment as litter, and, like sediments, nutrients and toxins, is transported by wind and water to the ocean.  http://www.environment.gov.au/coasts/pollution/npa/pubs/npa.pdf
[3] More information Westernport Seagrass Partnership can be found on their website http://www.seagrass.com.au
[4] Range of protection for marine protected areas http://www.environment.gov.au/coasts/mpa/about/index.html
[5] Marine Care Ricketts Point http://www.marinecare.org.au/ 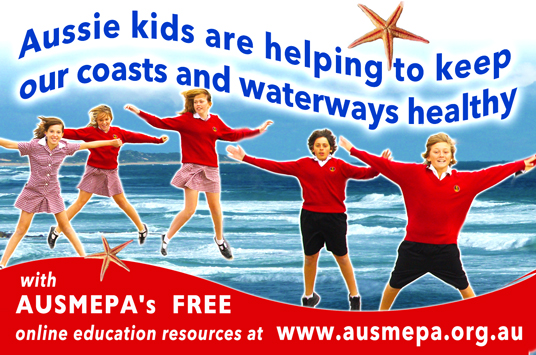