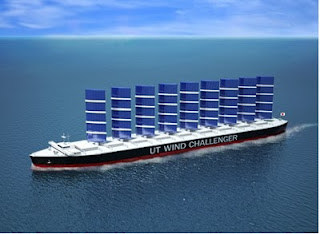 There has been a growing momentum in the use of wind power once again, even on larger vessels. Recently a pair of Japanese professors designed a cargo ship with telescopically reefing hard composite sails, 50 metres high and 20 metres wide. The the motor assisted vessel would use 64% less fuel according to a simulation done using an actual trade route.

To see the full article at Baird Maritime News Alert click here
Posted by AUSMEPA Marine Education at 10:49 AM 0 comments 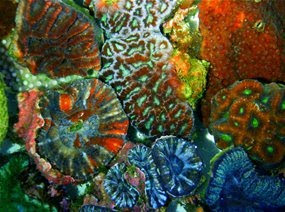 Below find an excerpt of the ABC News in Science article.

"Lord Howe Island, Australian scientists have discovered a cluster of brilliant shallow-water corals that could help in the search for anti-cancer drugs and to understand global warming."

"The vividly fluorescent cluster was found in waters off Lord Howe Island, 600 kilometres east of the Australian mainland, with some displaying rich reds that were difficult to find and in high demand for studies of cancer cells, says researcher Dr Anya Salih."

"We are using these pigments to light up the workings of living cells and to study what goes wrong in cancer cells," says Salih, from the University of Western Sydney."

"Earlier this year, the coral reefs of Lord Howe Island experienced a sudden mass bleaching event caused by warming of seawater. But the fluorescent corals had been much less damaged by the bleaching, lending "support to the hypothesis that fluorescence can provide some level of protection to corals from temperature stresses due to climate change."

To include a study of the effects of climate change on coral-bleaching into your classroom planning please visit the AUSMEPA free online unit of work. Click here
Posted by AUSMEPA Marine Education at 7:42 PM 0 comments

The Majestic Plastic Bag - A Mockumentary

It is really easy to focus on shocking news events that show us stunning and frightening images like the Deep Water Hoizon tragedy. It is much harder to keep our focus on the things creating marine pollution that fall within our own sphere -- the continuous plastic pollution rolling into the sea day after day, month after month, year after endless year. The only real difference between the two is the time frame and the long term impact.


Teachers wishing to include a study of marine pollution into their planning can click here to enter AUSMEPA's Marine Stormwater Pollution unit of work.
Posted by AUSMEPA Marine Education at 2:34 AM 0 comments

AUSMEPA MEDIA RELEASE: Plastic bottles and plastic bags pose one of the greatest threats to our seas and oceans

We have all heard this cry so many times before and tend to dismiss it as somebody else’s problem. Thankfully, at long last, something is being done which if adopted will reduce plastic bottles and plastic bags ending up in the sea and destroying our valuable marine life.


Michael Julian, Executive Director of the Australian Marine Environment Protection Association (AUSMEPA) said today he was very pleased that Federal and State governments were beginning to seriously tackle the problems caused by plastic bottles and bags ending up in the sea and killing a range of marine life from turtles to whales which swallow these items mistaking them as a food surce.

AUSMEPA strongly supports the initiative of the Federal and State governments in announcing a move towards a national scheme for a deposit levy on cans and containers referred to as CDL, which will include plastic bottles.

The Environment Protection and Heritage Council agreed last month to undertake the development of a Consultation Regulatory Impact Statement (RIS) which will be based on the substantial work already completed on options to address environmental impacts and the reduction of litter from packaging wastes such as beverage containers. However, the RIS will go beyond just a Container Deposit Levy and look at other options to reduce the environmental impact of discarded packaging.

AUSMEPA also congratulates the Northern Territory government which will be joining South Australia in the banning of plastic bags used by shops and supermarkets. The Northern Territory announced this week that it will ban the use of plastic bags from the middle of next year; the ban will be phased in over 4 months and will help reduce the 40 million plastic bags used in the Territory. Mr. Julian said this should happen right across Australia not just in those proactive States and Territories which have already taken this action, pollution of the sea knows no boundaries.

The disposal of packaging material is a global problem, the Asian Development Bank has announced the work it is doing to reduce major litter pollution in the Citarum River in Indonesia. A video clip on U-Tube which can be seen on the AUSMEPA Oceans Whispers Blog site http://ausmepa.blogspot.com/ tells the horrifying story.

David de Rothschild recently drew international attention to the problem of pollution and the considerable harm to the marine environment caused by plastic bottles when he sailed his boat “Plastki”, made with 12,500 plastic bottles, across the Pacific Ocean from San Francisco to Sydney.

Michael Julian fully endorses David de Rothschild’s comments that governments have to step up their endeavours in reducing the community’s reliance on plastic. Mr. de Rothschild said voters need to rediscover people power to force change and bring about real and meaningful policies to help the planet.

He said it is well known that 80% of the pollution in the sea comes from the land and we all have a responsibility to do much more to stop this happening.

In an effort to make Australians more aware of the problems of litter and chemicals getting into stormwater drains AUSMEPA has developed an educational unit of work for schools titled Marine Stormwater Pollution which is freely available for all middle year students at schools throughout Australia from AUSMEPA’s website ( see http://www.ausmepa.org.au/marine-stormwater-pollution/ ), a free poster which highlights the problems of storm water pollution is available on request. The simple message from this education unit is what you put down your drains can end up in the sea.

For more information about AUSMEPA and the suite of marine environment education units of work, please visit the AUSMEPA website http://www.ausmepa.org.au/

To find our more information on Plastiki http://www.youtube.com/watch?v=i3Sb3TGuxss&feature=channel
Posted by AUSMEPA Marine Education at 5:17 PM 0 comments


Many of us have been appalled at the photos floating around on the net about the Citarum River in Indonesia. This clip shows some of the problem sources, outputs and some of the work being put into play through the Asian Development Bank (ADB) to turn it around. It will be interesting to see how the cleanup progresses.

Once again, the importance of keeping our stormwater run-off clean is made stridently clear. Education and action to prevent polluting our rivers and ultimately our oceans is vital to the health of us all.

AUSMEPA has an educational unit that is free and online specifically on Stormwater Pollution (click here)
Posted by AUSMEPA Marine Education at 6:07 PM 0 comments

IPMEN helping to shape marine education in the Pacific 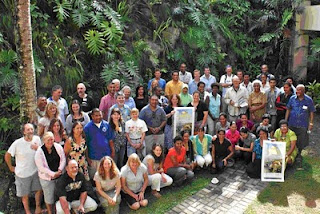 IPMEN is a Pacific network of individuals and organisations like AUSMEPA that believe marine education plays a crucial role in sustainable solutions for the Pacific region.

It aims to foster collaborative relationships that will lead to the creation of resources, programs, training and leadership necessary to build ocean literacy at every level of society in the Pacific region.

The IPMEN conference, held last month in Fiji, incorporated traditional and shared western knowledge. Two key outcomes:
• Fijian government made a commitment to include marine education into their school curriculum.
• A cooperative forum was initiated between students from Fijian and Australian secondary school 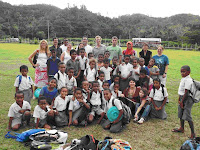 All of he 2010 IPMEN conference presentations are accessible on the web at www.coexploration.com/ipmen.


The next IPMEN conference to be held in Chile in 2012. For more information, go to http://www.ipmen.net/