If you loved the movie Happy Feet you will enjoy getting to know the Blue-footed Booby (Sula nebouxii).

This beautiful subtropical/tropical marine bird, native in the eastern Pacific Ocean, is easily recognised by their feet! Males use their bright blue feet in an elaborate dance to win their mate.

Boobies spend their lives at sea hunting fish and are related to other well known sea-birds the gannets. They are a big bird with few predators although vulnerable as young at nesting areas. Like all other seabirds they are heavily impacted by human land-based activities that create marine debris including deadly plastic pollution.

The western Pacific Ocean hosts other varieties and in Australian waters one can find the Abbotts Booby, Brown Booby, Masked Booby and Red-footed Booby.

Yes, there is a Red-footed Booby! What interesting and colourful marine birds. We need to look after them.

See more at ozanimals.com here and a Wikipedia article here.

Natural disaster and the affect on ocean water quality

Australia has long been known as a land of contrasts. This has never been demonstrated better than in recent years. Throughout 2018 we have been inundated with unusually disastrous or cataclysmic natural events, drought, storm and fire that exceed cyclic expectations.

We learn about these shattering news events from a land-based perspective however little perspective is provided as to the effects on our coastal waters in the aftermath other than the occasional aerial footage. There is no easily available information to holistically explain what happens in the ocean and yet the effects of almost everything that happens on the land has a large impact on the health of the ocean. We can infer that major events may have massive impacts.

Storms
Extreme weather can be devastating. Each drop of rain is an explosion hitting earth. Raindrops pummel and scour the land during any storm but even more so during extreme events. The aftermath sees trees down, crops ruined, debris across flooded roads, severe erosion, animals and plants in shock or dead.

Waterways and drains become clogged thoroughfares for debris, sediments, and poisonous chemicals, dragged downward by gravity until the water can go no further. All of those watery passengers can be classed as natural debris or non-natural pollution.

Any keen snorkeler, diver or surfer can tell you that the water is much cleaner and clearer during times of drought and that storms following a drought make it much harder to know what is in the water. In fact shark experts pointedly advise against swimming near murky stormwater outlets, streams or rivers following bad weather as opportunistic sharks will be looking for quick snacks in stormwaters.

Drought
Plants hold the land together with their roots, when removed the dirt particles shift and move easily with wind and water causing severe erosion. Storms can pull riparian vegetation away to cause erosion however drought is also the cause of erosion as plants to die of thirst and lose their grip on the soil.

Fire
Thunderstorms bring not only the threat of flooding but also lightning strike and fire. When a fire devastates the land, as it has around Australia this past year, plants die, cinders and smoke are lifted into the air and deposited surfaces everywhere i.e. forests, paddocks, buildings, roads, roofs. The wind and rain eventually wash those deposited chemicals and particles into the nearest river, stream or drain. Affected waterways carry a higher concentration of contaminants from the catchment in disaster run-off. The waterway becomes a poisonous highway straight down into the ocean, poisoning and smothering inhabitants.

Land changes
What is the ripple effect from fierce disasters like drought, storms and forest fires and how do they affect the health of our ocean territory (200 nautical miles surrounding Australia). Perhaps an equally telling question is what happens to us if our ocean is unwell, corals die, fish numbers drop, turtle and iconic species are lost or ecosystems fail?

The easiest example relates to the erosion of sediments carried downstream. The bigger the storm, the greater the pollutant load down the rivers and creeks.


Seagrasses, which are true plants and prolific food factories can be smothered by dirt particles. Without light they cannot photosynthesize and die. Without seagrasses whole ecosystems can collapse and a whole range of animals including commercially important fish species are badly affected. Corals suffer also.
Australia is unique. Unlike the northern hemisphere, this island continent is built on a low nutrient system. That means less of one kind of thing but lots of smaller numbers of many different living things to form a viable web of life. Owing to the fragile nature of our ecosystems we now know that Australia has one of the highest extinction rates[i].

Population
Where people are the land is changed by how they use it, farms, towns, industry and even tourism. The number of people living in this breakable landscape has been growing astronomically, as it has across the world. in 1950[ii] the population was 8.2 million people and it increased more than 25% by 1960. Between 1950 and 2017 the numbers are staggering, increasing to 24.7 million increasing more than 200%[iii].

The more of us there are the greater the land changes the greater the impact on the health of our seas and ultimately our own. Are we trying to understand how to find a sustainable balance?

This chart is of interest showing how, over 130 years, things have changed. You can view the whole well written article at https://gcaptain.com/what-is-the-role-of-the-oceans-in-global-warmingclimate-change/ 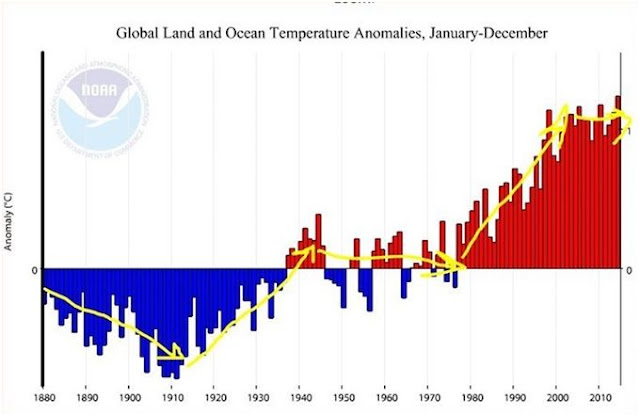